Buffalo's high-tech industry is growing every day, through startups and established companies. One of those dedicated to helping to grow the regional sector is IBM.

IBM established its Buffalo Innovation Center in 2015 because it saw where the region was headed. Since opening, the company has continued to expand and has welcomed other high-tech tenants to its Innovation Center, originally imagined as a hub of technology and innovation housing 500 high-tech employees of various, co-locating companies. That dream is well on its way to full reality, too. And it has started with IBM itself.

IBM has service desks and an expanding analytics team in its Buffalo Innovation Center.

“The amount of IT talent in the region is amazing,” said Jay Goodwyn, IBM Buffalo Innovation Center director. IBM has been wildly impressed by graduates from University at Buffalo, Buffalo State, and even Rochester Institute of Technology, and University of Rochester.

As of Feb. 1, IBM’s innovation center had hired 74% of its talent from Western New York colleges. Another 10% had been hired from within New York State, as well.

The IBM Buffalo Innovation Center is now home to high-tech employees from IBM and its official business partner LPA, that co-located with the company in 2015. 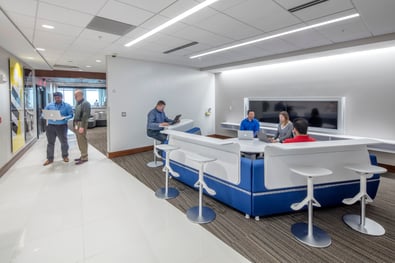 The opportunity to co-locate with IBM is what makes the Innovation Center in Buffalo’s Fountain Plaza such an intriguing opportunity for expanding or relocating companies.

“IBM is here in a major way to contribute to growing high-tech skills in Buffalo,” Goodwyn said. “IBM is here to be a catalyst.”

Co-locating with IBM offers a company powerful analytics, cloud development, Watson databases, and more. Companies can also access experts through IBM, not just via email but directly in the building. The partnership could also be advantageous to academic spinoffs in research and development.

The building in which a high-tech company new to the area would locate in is also a great draw. IBM has Innovation Centers across the country and with Buffalo being one of its newer locations, the space is optimized and has the benefit of hindsight to correct past mishaps.

The Center spans floors 7-12 in a portion of Fountain Plaza. The office space is open-concept and malleable to a tenant, with whiteboard dividers on wheels. A tenant of the Innovation Center would have access to all the amenities, including a large kitchen, multiple conference rooms, and more causal meeting spaces for quick huddles. Some of the walls are Wink’d and able to be drawn on with a dry erase marker. 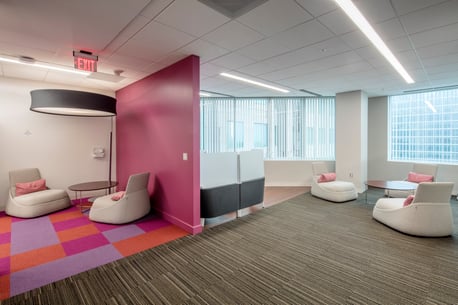 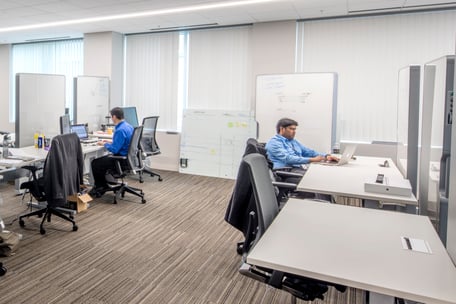 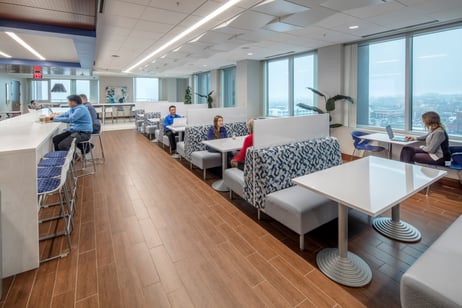 In total, the office space is roughly 105,000 sq. ft. spread across multiple connected floors. The Innovation Center can configure the space as necessary for interested tenants. The office space is fully furnished with a modern style.

The location around the office has also been thoroughly enjoyed by employees already working there. Goodwyn praised the density and vibrancy of the downtown location.

“Every day you go outside there’s a new restaurant,” Goodwyn said.