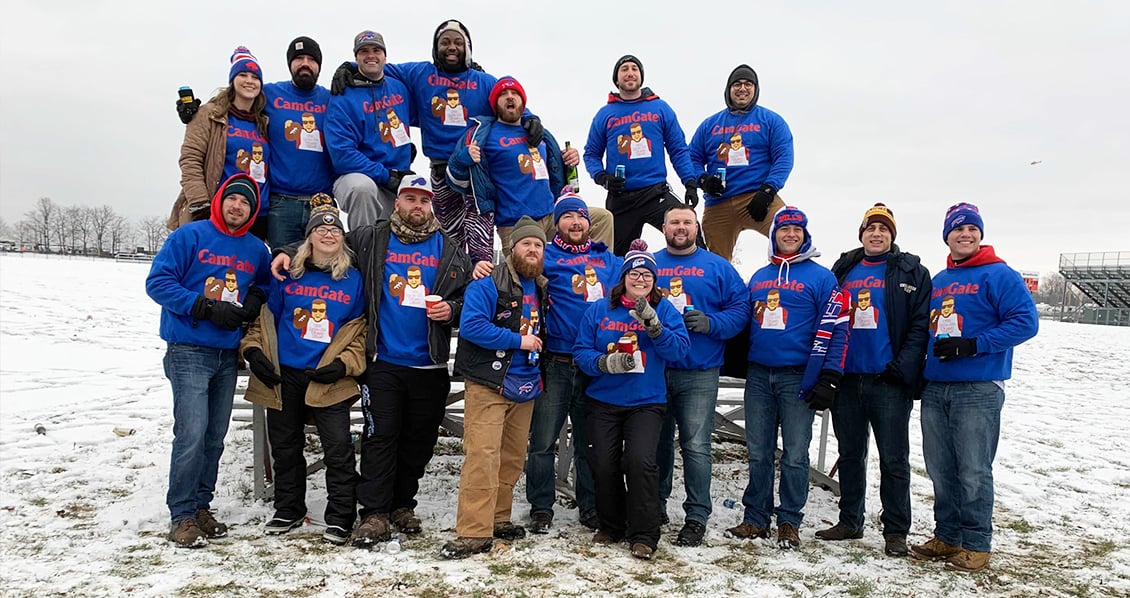 5 tips to being a Buffalo Bills fan

You may know Buffalo for chicken wings and blizzards. Or maybe you’re a bit more familiar with our beautiful four seasons, expansive waterfront, short commute times, affordable living, available amenities, and so much more. Or maybe you just know Buffalo via Bills Mafia.

But there is a lot that goes into the loyalty and energy we bring to the stadium (and often the airport) week after week. Whether you are new to Buffalo, a fan from afar, or just intrigued by the viral experience you see online, we’ve got everything you need to know, from buying your first pair of Zubaz to being ready on Game Day (First tip: we start early).

“Go Bills” is an all-encompassing salutation

In Buffalo, we don’t really say things like “hello” or “goodbye” – we have the phrase “Go Bills” to cover that. Bump into someone you know at the grocery story? Go Bills! Logging off of a virtual meeting? Go Bills! My mother even always told me if you are doing public speaking and looking for a way to wrap it up all you have to say is (you probably guessed it): Go Bills!

When you buy your tickets to your first Buffalo Bills game, the ticket will probably say game time is 1pm. While that’s technically true, the game for us fans starts at something like 9am…or 8am…or if you’re in the camper/RV crowd, sometime on Friday night.

My tailgate, CamGate (built by the people, for the people), starts promptly at 9am. Gameday is about getting all of your friends, family, and fellow Buffalonians together to discuss the game plan over some good food, a few beers or pops (not sodas), and popular yard games like cornhole, washers, and Buffalo’s own Kan Jam. The goal is that when you march into the stadium, you better be revved up and ready to be the Bills’ 12th man.

We give our all

The game on the field and the tailgate preceding are fun, but Bills Mafia knows where its priorities stand. Buffalo is known as the City of Good Neighbors and we live up to that moniker in our charitable giving. During the 2020 season, Bills’ quarterback Josh Allen, unexpectedly lost his Grandmother Patricia Allen. In a wave of support for our neighbor, Bills Mafia started to donate in $17 increments (also Josh’s number) to the John R Oshei Children hospital under the Patricia Allen Fund. Within the 10 days the fund grew to just over $776,000, and by the end of the year broke $1 million.

You may have heard at one point we had a…small…playoff drought. That was broken in part by an amazing play by Cincinnati Bengals Andy Dalton and Tyler Boyd, who helped the Bills clinch the playoffs for the first time in 17 years. To thank them for their efforts, Bills Mafia raised over $250,000 for Dalton’s charity in just a few days.

26 Shirts is a local nonprofit that does a Buffalo themed (designed by local artists) t-shirt run every two weeks. A portion of every shirt sold is donated to support charities focused on health/medical emergency and family emergency aid. 26 Shirts was cofounded by Del Reid, who is known to have started the moniker Bills Mafia, as well.

We start them young

Everyone has their first story or experience when they knew they were a Bills fan. Mine came quite early. My mother was supposed to deliver me on a Friday, but she told the doctor, "I have tickets to watch Jim Kelly and the Bills squish the fish (our rival Dolphins) and I'm going to that game." Nine months pregnant, she actually went to watch the Bills beat the Dolphins on Sunday at the stadium, and instead delivered me the next day on Monday. You could say I wasn’t given much choice in deciding to be a Bills fan, but I know I would’ve come to the same conclusion had I been.

Growing up though we experience family parties on Sundays, Bills themed days at school, and your first time visiting “the Ralph” (Highmark Stadium) where you hear the entire stadium do the “Hey Chant” for the first time (it is still magic to my ears). These are all traditions that build the foundation for life-long "fandemonmium."

You would be hard-pressed to find a corner of this earth where you can’t find a Buffalo Bills fan. Maybe you reading this are even one of them – a Bills Backer who proudly reps your swag and defends our team through thick and thin to your out-of-town buddies/rivals.

Pro tip: If you’re doing any traveling make sure to pack some Bills gear, even out of season, and proudly wear it. I can guarantee someone will shout a “Go Bills” (hello) at you and you’ll make a friend for life.

Buffalo is a very special place that can never be fully explained but can be experienced. We have strong history of success and greatness and while we may have gotten away from that for a little bit, it only further proved how deep the passion of this fan base runs and how much this team truly means to our neighbors, psyche, and (for better or worse) dictates the mood of our Mondays. Now that we are fighting our way back again, I know we are just on the edge of greatness.

So with that said, I'll leave you with the words of Bills Hall of Fame head coach Marv Levy, “Where else would you rather be than right here, right now?”

And as always, GO BILLS!

Cameron Smith is a Buffalo Bills season ticket holder and cofounder of the CamGate Bills tailgate.