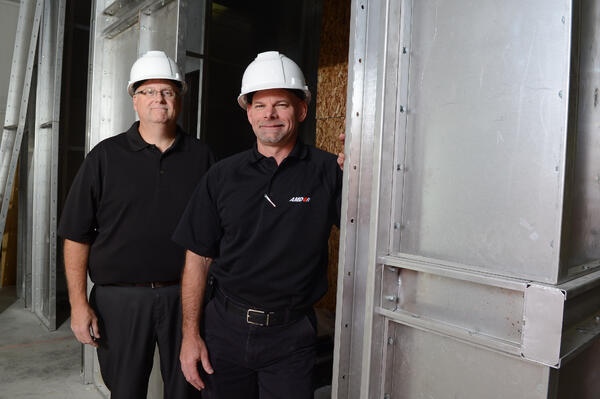 After a company expands to Buffalo Niagara we like to visit and see how their operations are progressing . Recently we stopped by AMDOR, a division of Whiting Group, which is a Canadian headquartered manufacturer. Whiting Group selected Buffalo Niagara for their AMDOR location. After renovating its facility, AMDOR is now fully operational and has been running seamlessly in its first six weeks.

Here is a behind the scenes look at AMDOR’s expansion and the work that went into setting up shop in Buffalo Niagara:

Headquartered in Burlington, Ontario, Whiting Group is an advanced manufacturer with multiple divisions and facilities including a location in Lancaster, NY. The company needed to expand its AMDOR division, which manufacturers roll up doors for fire apparatus, ambulances and other specialty vehicle applications. AMDOR considered expanding at its existing facility in Burlington, or establishing their first U.S. site in Buffalo Niagara, Wisconsin or Florida.

AMDOR weighed several critical priorities in their relocation decision, including:

AMDOR purchased a 21,000 sq. ft. existing facility on eight acres in Lancaster, NY and completed a 10,000 sq. ft. addition. AMDOR is on its way to hiring 17 people this year, with plans to have at least 28 full time employees by year five.

Learn more about expanding your Canadian business into the Buffalo Niagara region.