Tags: Be in Buffalo

After graduating college in New Hampshire, Kyle, an Orlando native, started to survey his options. He was naturally drawn to the bright lights of places like New York City and Boston. Then his phone buzzed with an email from M&T Bank, recruiting him to Buffalo for their management development program.

Skeptical at first, Kyle compared average rent prices in Buffalo to his friends’ rents in NYC and Boston. The glaring cost advantage was enough for him to at least visit Buffalo and take an interview at M&T.

“What I found was the big city feel I was looking for without feeling overwhelmed by mega metro areas,” Kyle said. 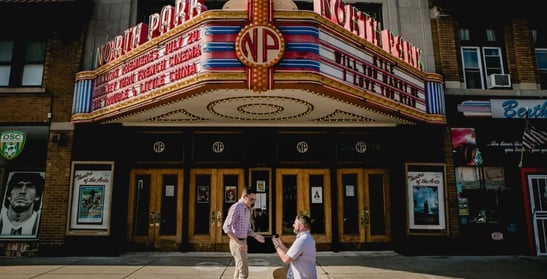 Kyle fell in love—first with Buffalo city living, the bar and restaurant scenes, and his job. Then he fell in love again, this time with his now husband Ryan over their mutual love of beer and dogs. Today, Kyle is a homeowner in Orchard Park, establishing roots in Buffalo.

What most surprised you about Buffalo?

The people. There’s a reason they refer to Buffalo as The City of Good Neighbors. I was originally a bit nervous moving to a new city without knowing anyone in the area, but that quickly faded when I realized the amount of diversity, open-mindedness, and culture that exists here. In fact, when my fiancé was proposing on one knee in the middle of Hertel Avenue, people were cheering for us, taking photos, and honking their car horns as they drove by the scene.

I’ve lived and studied abroad and traveled to many countries, and I have never met people more willing to smile, stop to talk, or just give you directions.

I’m such a foodie, so I would say the food scene. It’s one of the best in the world—absolutely first class. You think of Buffalo, and you think chicken wings. But we’re more than wings; Buffalo is home to some of the best wine joints and dining experiences I’ve had. And even if you do want to get wings, there’s six different places you can debate with your friends over who’s got the best. The right answer is Gabriel’s Gate, by the way.

Learn about more of the innovative and inspiring people relocating to Buffalo.